Chickpea is one of the oldest among legumes and the small one, more colorful and tasty variety, comes from the East. This legume should be soaked for 12 hours with water and a spoonful of salt to make the skin softer and therefore to facilitate the cooking.

Chickpeas are mainly protein food in addition to the wide range of vitamins and minerals.
The abundant presence of magnesium and folate brings benefits to the heart and blood circulation, lowering the possibility of a heart attack. While the presence of unsaturated fatty acids, better known as Omega 3, lowers the levels of fats in the blood: the so-called “bad cholesterol” and triglycerides, preventing degenerative diseases such as hypertension and arteriosclerosis. In Italy, it was widely used in the period of the Roman Empire and in the Middle Ages, when it was called the “meat of the poor”, due to the considerable nutritional sustenance it brought. Later, with economic prosperity, the demand decreased, and consumption increasingly moved towards animal proteins, especially meat. Today, given the results of bad health, which the immoderate consumption of meat and other animal proteins have provoked, this legume has been greatly re-evaluated due to its nutritional and healthy properties. An excellent alternative to animal proteins. 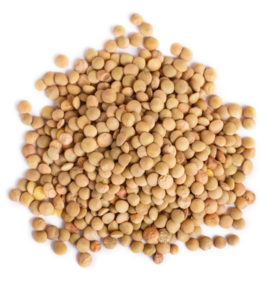