This is how to grow rice in the plain of Catania

Care to cultivation practices from soling to irrigation to crop rotations and the use of precision tools. Like this, Sebastiano Conti managed to grow organic rice in dry in the plain of Catania.

The method applied is as follows: after the cutting of the clover, a soft plowing of the land is applied with maximum depth of 15 cm at the end of April; the ground is levelled by a laser levelling device with a gradient of 0,02 % in early May to ensure a good surface irrigation. The lands are fertilized with only organic products. Then, a precision spaced planter is used with a satellite tractor. After sowing, collective tanks are made at a distance of 40 meters from each other to facilitate the flow of water. In this way you start with the first irrigation and then, based on the temperatures of the soil and the environment, you decide how and when to administer other water. Usually, about 6 irrigation are carried out throughout the cultivation cycle. Many wonder how it is possible to grow rice in a fairly stingy land of rainfall such as Sicily, but it is precisely with this turn-based irrigation system that about 60% in water is used, compared to that one used in submerged rice cultivation. 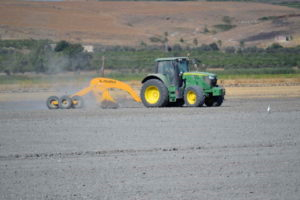 If the renaissance of rice-growing in Sicily is thanks to Giuseppe Manna who in 2009 decided to recreate a rice field in the Leonforte area, in the province of Enna; Neo Conti deserves credits for having bet on organic rice. The first test dates back to 2016 with six hectares, thanks to a project developed in collaboration with the University of Catania, in particular by Professor Salvatore Luciano Cosentino, director of the Department of Agriculture, food and environment, assisted by Paolo Guarnaccia and Paolo Caruso and with the agronomic study Pappalardo. The 2017 season saw the sowing of 30 hectares with the Carnaroli, Brio and Opae varieties. “It went very well – Neo Conti proudly states – we have received visits from Piedmontese farmers who came to observe our work and were amazed by the results” . 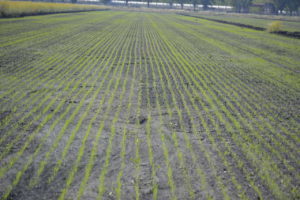 To grow organic rice “dry”, Conti proceeds as follows: “We do a light plowing, no more than 15 cm deep in late April/ early May – says Sebastiano – then we level the ground with a slope of the 0.02% with a laser leveler (a very important operation for the sliding irrigation), then we plant with a precision air seeder. Then we move on with a harrow and then with a toothed roller to reduce compaction. Then we create drains at 40 meters away from each other, and we practice the first irrigation – Nello continues – then, depending on the soil and the environment temperature we decide how and when to still give water “. After sowing, Conti does not carry out other operations until the harvest in September. For the fertilization, the Agribioconti company uses self-produced manure. Another important aspect of the agronomic technique is rotations. Conti usually applies the following sequence: wheat, rice, clover, vetch or wheat. He also planted soft wheat for the first time a few years ago. “Thanks to these rotations – Conti underlines – we have also increased the organic substance”. The soil in the area is medium-textured / clayey. 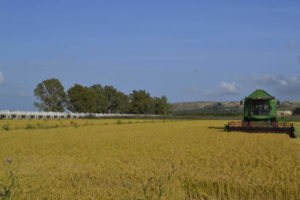 And speaking of water: how is it possible to grow a crop like rice in a stingy with rainfall land like Sicily? Sebastiano Conti reveals a surprising fact: “With our sliding irrigation system we use about 40% less water than cultivation of corn, sorghum or alfalfa”. For water supply, the company is connected by a pipeline from the Catania drainage consortium, but it also has 5 reservoirs of five hectares of surface from which it draws: “We have never had water problems – Conti assures – not even last summer, although it was particularly arid, thanks to the reserves accumulated in our reservoirs, connected by a system of underground pipes that allows us to extract the water without using pumps and therefore without fuel consumption “. 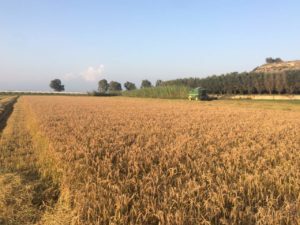 And what about yields? “The average is 80 quintals per hectare – Nello affirms- for the record, this year we have made 60 quintals with Opale and Carnaroli, while Brio has produced 110 quintals: an outstanding amount”. For other crops, however, always in organic farming, the average yields are 45/50 quintals per hectare for durum wheat with narrow sowing: “Instead of 180 kg of seeds per hectare we use 250 kg. The narrow sowing is also used to counteract the weeds because the competition with the crop is much stronger and the weeds are unable to develop. In some particularly positive years – Conti says – we have recorded yields almost equal to the conventional”.